Today marks the end of Inmates Take Over the Asylum Week — and what a week it’s been!

First, CJ thought combining baseball, National Treasure, and Hitler would be a fantastic new project for Nic Cage. Then, in celebration of our 100th post, Anthony reviewed the trailer for Halle Berry’s new thriller “Kidnap” and accused her of nepotism because she starred opposite a man she wasn’t related to (or even knew).

Now it’s Mike’s turn to recommend a new release to our readers. Mike swiftly backhanded us and opted instead to review a movie that came out a month ago and has already made $640 million globally.

SPOILER ALERT: There are literally no spoilers.

Mike: Since Kevin isn’t here to enforce any of his highfalutin moral standards I’m going to follow Anthony’s lead and talk about “Spider-Man: Homecoming,” a movie I have never so much as seen a trailer for.

The movie opens with an overhead shot of Canada doubling as a bustling American city when BLAM, a bank alarm sounds! Four armed men charge out of the front door with a young woman they’ve taken hostage. One of the men has an Uzi which he uses to spray a row of cop cars, but don’t worry, everyone is fine as humans can’t be hit by bullets in Marvel films. 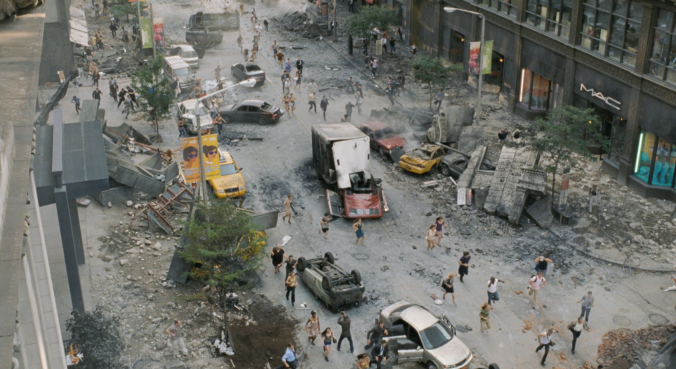 “Everyone run for your lives, you’re in absolutely no danger!”

The hostage screams, “Where is Iron Man when you need him?!” At that exact moment, “Fortunate Son” by Creedence Clearwater Revival kicks on as Iron Man dives into frame, narrowly missing a commercial airliner full of Asian tourists who snap photos of him as he passes by. Robert Downey Jr. says something witty like, “Glad I got my taint waxed!”

From the opposite end of the sky Orlando Jones (taking over for Don Cheadle taking over for Terrence Howard) as Sgt. Det. Lt. James “Rhodey” Rhodes, Police Squad, enters and lobs Downey a softball like, “Take it easy Stark, we don’t want another situation like we had in Panama!” to which Downey nonchalantly replies, “Panama…I thought her name was Cheyenne?” (Cue “Panama” by Van Halen.)

Can you tell the difference? Congrats, you’re a racist.

Now the bank robbers are speeding down the main avenue of New Orleans/Atlanta/Toronto when Iron Man rips the top off their stolen armored car (did I mention they hijacked that on their way out? Because they did) and Rhodey pulls two of the robbers from inside and leaves them stranded on the roof of a building for safe keeping.

By now I’m forgetting which superhero movie I’m supposed to be in. I check my ticket stub and realize it’s actually a four-page printout from Groupon that I can barely read, but sure enough it’s Spider-Man, so I’m thinking, “Are these Sno-Caps going to straight to my head? What craziness have I walked into?!”

Once I get my senses back the armored car is teetering off the edge of a skyscraper, Iron Man’s suit is malfunctioning, and the attractive female hostage is dangling over the edge for dear life. All hope appeared to be lost, her grip loosened, and she falls dozens of stories, but just before she’s about to collide with the ground she’s hit right across the eyes with the unmistakable salty sticky sour delight of Spider-Man’s hand ejaculate before he swings her to safety.

Spider-Man saving a hostage with his webbing.

Iron Man and Rhodey look at each other like, “What-the-WHAT?!” and, in a flash, Spider-Man is gone.

At this point, 45 minutes of random dumb garbage follows that was mostly unmemorable with the exception of one short monologue by Peter Parker. It went something like this:

“I’m Peter Parker. I got bit by a radioactive spider and now all the sweet babes in Metropolis want to get all up on this Spidey dong!”

The hero of Metropolis: Spider-Man.

The kid has swagger, I’ll give him that. I didn’t even know Edward Furlong was still an actor, but he is and he got himself diesel to play the role.

TGD can only think of one word to describe casting a 40-year-old as Spider-Man: Bold.

Another 45 minutes of Spider-Man learning how to hone is money shots and act like a respectable hero is shown until finally he squares off against the main villain of the picture.

When all hope appears to be lost, and Peter Parker is certain to die and the city to fall in ruins, the entire Avengers team shows up and saves the day, thus teaching Parker a valuable lesson on teamwork. Even the Hulk shows up! In fact, the Hulk and Thor have a contest to see who can kill the most villain robots before the battle is over (Spoiler Alert: Hulk loses by one!).

With the Avengers’ victory seeming imminent, the villain triggers his machine one last time, temporarily disabling the super powers of everyone on the team with the exception of Scarlett Johansson — because she has zero superpowers. She actually has no place being in The Avengers at all, but the team likes to keep her around as eye candy for when they forget to pack their J.O. materials for long trips.

I’m veering way off course here, where was I? Oh yes, Scarlett – completely unaffected by the machine – is able to walk right up to the villain and put him in a sleeper hold. It is now that the young Peter Parker realizes a true hero doesn’t take lives, they save them. Plus it’s a mark in the win column for all those silly broads out there clamoring for a positive female role model to shatter the glass ceiling of a completely imaginary universe.

You can try to accuse Mike of being a misogynist, but earlier we busted you for being a racist. Your call.

The final scene is Peter Parker sitting at the dinner table with the attractive female hostage from the beginning of the movie. Aunt  May is in the kitchen stirring gravy, while Peter and the dime piece play footsie.

In the background, the TV is barely audible, but we can tell it’s the evening news. Apparently, something horrible is going on back in Calgary/Brooklyn/Denver and Peter needs to go save the day. He disappears just as Aunt  May places a 14-pound turkey on the table.

May and the whore share a wink and the last thing we see is Spider-Man swinging across town before the credits roll.

TGD: You know, given that the other day Mike texted us, “I don’t know anything about Spider-Man. Almost nothing,” we probably should have seen this coming.

Mike is super excited for Marvel’s next movie, this fall’s “Avengers: Infinity War.”

Well, that about wraps it up for CJ, Anthony, and Mike. Kevin returns next week to wrestle the keys back from us and post reviews of the new “Death Wish” trailer and “Dredd” (the good one).

One week. I left you guys in charge for ONE week.

4 thoughts on “Mike Was So Committed to Giving a Spoiler-Free Review of “Spider-Man: Homecoming” He Didn’t Even Watch It”

Leave a Reply to Mike (From TGD) Cancel reply